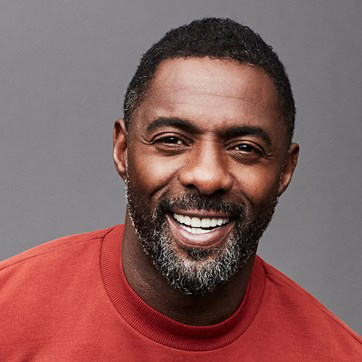 Golden Globe and SAG winning Idris Elba captivates audiences as an actor, producer and director, and continually secures his position as the one to watch in Hollywood. He is the first actor to receive dual SAG awards in one evening.

Idris’s career skyrocketed on the small screen in some of the UK’s top-rated shows. Soon after, he landed the role of Stringer Bell in HBO’s critically acclaimed series The Wire (NAACP Image Award nomination). In 2010, Idris landed the title role on the BBC mini-series Luther, which earned him a Golden Globe, SAG Award and four Emmy nominations. In 2005, he began his film career; his credits include American Gangster (Golden Globe nomination), Mandela: The Long Walk to Freedom (Golden Globe nomination), Beasts of No Nation (SAG Award, Golden Globe nomination) and the Oscar-nominated film Molly’s Game.  He can be seen this April in the Netflix film Concrete Cowboy, which he also produced, and this summer will be starring in The Suicide Squad 2.  Other upcoming films include The Harder They Fall and Three Thousand Years of Longing.

Behind the camera, Idris made his feature-film directorial debut at the 2018 Sundance Film Festival with Yardie. In 2013, he founded his production company, Green Door Pictures, to champion diversity of thought. With Green Door, Idris released the documentary Mandela, My Dad and Me, produced the TV mini-series Guerrilla for Showtime and created, produced and appears in the Sky comedy series In the Long Run. He also created, produced and starred in the Netflix comedy series Turn Up Charlie.