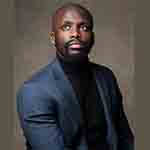 Derek Owusu is an award-winning writer and poet from North London. He discovered his passion for literature late in life while studying exercise science at university. Unable to afford a change of degree, he began reading voraciously and sneaking into English Literature lectures at the University of Manchester.

Owusu has written poetry and short stories for the BBC and ITV and regularly features on literary prize judging panels.

In 2019, Owusu collated, edited and contributed to SAFE: On Black British Men Reclaiming Space, an anthology exploring the experiences of Black men in Britain.

His first novel, ‘That Reminds Me’, and the first work of fiction to be published by Stormzy’s Merky Books imprint, won the Desmond Elliott Prize for debut fiction, the judges praising it as a ‘transcendent work of literature.’ In 2020, Owusu was one of the founding members of the Black Writers Guild, whose formation was due to the lack of representation and inequalities that exist within mainstream publishing in the UK.

We represent Derek for literary, film and TV rights. To speak to us about these please email [email protected]