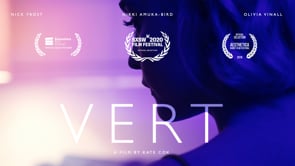 To wantaway from the phenomena of the self, and project the inner reaches of our minds ideal self, is the alluring premise of Kate Cox’s VERT – a short film based on the insightfulness of virtual reality through the lens of a couples quiet 20th anniversary.

The film starts with a homey feeling, cosy, easy-going and spatially crammed, with Emelia (Nikki Amuka-Bird) and Jeff (Nick Forst) toasting to their 20th anniversary. Two bags sit on the table and Emelia reaches for them to briefly coach Jeff through its contents. A virtual reality visor, attached to the eyes and clasping the head, the futuristic tech could manifest the appearance of one’s ideal self. The shades of colour are

Having tried the device before, Emelia is ecstatic to enter this world, which acts like a dream space interconnecting the minds of those who wear it, in which she encourages Jeff to enter the world with her. As they both prepare to enter the dream world of this virtual reality, the concept of being able to replicate the ideal embodiment of yourself evidently worries the inexperienced Jeff, and such a feeling also came across me.

The light-hearted plot stocks a sense of everyday realism despite the Black Mirror’ish feel of the concept and ground-breaking technology in whole. Especially in our world, which is subjugated by imagery of beauty, identity, the politics of existing as a human being amounted with roles assigned before your existence.

With imposing interaction and impressions filtering our true selves every day, it all brings into question a comfortability in which we won’t be able to entirely articulate. Much goes untold, and VERT seems to be asking a question of its watchers regarding such thoughts, about their true selves and the acceptance of it.

I considered what my inner self appears to be, and even if mild changes to my everyday self it is still an idea of betterment beyond this first layer of reality. Whether I have some innate reservations of me, such as lingering fat around my body, an attention to the disturbed habitat of my lungs, and even what I would wear, where I would be, are all things I can only entertain within myself. The possibilities of technology and how it could help someone accomplish this vision goes untold, also bringing into question the propensity of imposing on privacy.

Would it be imposing to produce technology that accesses the dormant wishes of the mind? Will we be so accepting of what we would perceive in such a space, if ever possible? And are we truly far off such technology, with the haste of advancements evident in the world?