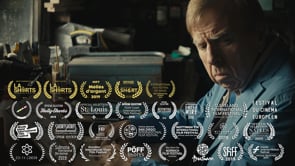 In a bleak home, Nigel, an elderly recluse, wallows in debris of an accumulated past and the weariness of being unkempt throughout it. We do not know how long he has trolled in this setting, or the age of the day, though the brilliant storytelling builds a futuristic picture of family ties, relationships and the struggle in maintaining them, and such kept me engaged.

Played by the immense and legendary actor Timothy Spall, Nigel sheds an installed bitterness, evident in a disgruntled face and defiant tone of yearning to be alone. With a wave of his finger, a TV monitor changes channel, until an array of loud children disturbs his peace in which he intends to keep. In doing so Nigel meets an anonymous Robot that intrudes on his own passion for refuge.

Timothy Spall is clearly an integral part of this film, and Magali noted how much she appreciated working with him. “I love his natural charisma: there’s something about him, a little ‘grumpy’ and really loveable at the same time.” She said in her interview with Stash Media about the Short. “I was very intimidated at first but when you start rolling… it just goes away, it’s just about making the best film you can.”

The walls are dressed in depression, tired paint and a dreary palette. Unwashed plates, mugs, and retired bottles of wine crowd the sink, and mice think this is an adequate home. The scenic shots crop moments where I think this truly could be my own, the homey feeling is booming within the set, aside from the hoarding of dirt which is usually curbed by a care no longer there. Hence it is picture perfect to summarise how Nigel exists. A visit from his daughter, Louise, played by Jessica Ellerby, trips over and alludes to a unified past, but it is a mere blast of memory lane. The compact cast also encouraged me to see the home as a character, which is all so important to me in a great short film.

This Time Away was written and directed by Magali Barbé. A multi-award winning short that captures an essence of her own difficult relationship with her Father. Magali stated “This film is a way to express that … and a sense of nostalgia too.” – all in which is captured within this turbulent short film.

It brings to life animation, stunning virtual effects so greatly worked into the short it feels a near distant reality where we could have such a true model of emotionally astute robotics. Having worked at the animation studio Passion Pictures before as an animator, Magali allowed them and a talented concept artist Ronan Le Fur to instil life into Max, the intrusive Robot. “it’s all the ‘CG magic’!” says Magali. “Modelling, rigging, animation, texturing, lighting/rendering, compositing. It was well prepped, so it went actually quite smoothly.”

I found this film enlightening in a sense of the future and an ability to care. Sci fi is often seeped in dystopian affairs and oversteps the agency of being Human and susceptible to change, as well as engaged with their own emotional and character flaw shortcomings. In this vein, I saw Nigel as a dishevelled man, battered by circumstances which in some ways could be claimed as unavoidable – this is the way of life. Nevertheless, one does not have to abide by the propensity of pain. Though the sentiments in the story and the vibrancy of empathy was truly heart-warming and kept me saying to myself there are other ways to react, other ways to be, in the darkest of moments.

Strange Beasts is another critically acclaimed short film written and directed by Magali, another sci-fi inspired film that does not linger on the dangerous velocity of technological advancements. You can watch This Time Away here – and check out her other work too: