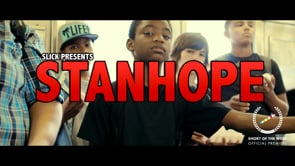 A spin of the camera grasps attention as fading text highlights this short film is based on true events. From the first scene, Stanhope is an attractive insight into the socialisation of a 13-year-old contract killer. Even though this short film was released in 2015, it was beautiful enough to sink me into a setting.

It upholds a perception of guiltlessness, evident in a child in comparison to the indecent preconceptions we have of a grittier upbringing of a harsh environment like Brooklyn, evoking a constant parallel of livelihoods within themselves and that builds a heartfelt story. Innocence is reckoned through cuts of impressionable young faces, as if slides from a comic storyboard and a reasonable hero is born by these themes.

The film is set in Brooklyn, written and produced by Solvan “Slick” Naim in 2015, and it captures a reality of abuse, socialisation, and contrasts it with a normality in which we expect. Though realising a brief history of teenage killers, specifically from Brooklyn, born from the transgression of abuse, the plot itself perches upon a moral compass that appears clairvoyant as it leads you through Stanhope’s own path to becoming a killer.

The tone of the film immediately sulks through gloomy and spooky beginnings, soothing you into what should feel like trauma but sheds as that tainted innocence. This feeling for me stemmed from the coverage of themes within such a life, the soiled happiness, the tainted relationships, a fragmented idea of love and trust, all evident in the main character Stanhope’s relationships and he narrates his transitioning mood amidst this imposing reality of it all.

Peer pressure is expected, topping off the concoction of trauma, tragedy, and the dubious environment that is Brooklyn and almost everywhere in a sense of inner-city delinquent behaviour. Realising the stupidity in acting out, it brews a being not so alien from the viciousness of what just might be considering their upbringings.

The likelihood of being poor, abused, educationally disinterested and misunderstood or neglected by a system build this setting unknowingly, and many characters must face these societal and humane issues as tainted children who shouldn’t have to.

This dilemma the characters within the short endeavour to work around, and it brilliantly latches onto these moments to depict how one could and should feel, giveaways to a what-if as it raises moments decisions change livelihoods forever. Stanhope expresses moments of joy, has an idea of love, but carries the immaterial weight of abuse and mistrust. His narration sells his position well, alongside an ambient soundtrack and sleek sound effects. Such makes the short feel fuller.

Hence, I wanted this short film to be a feature length, it would deserve such, for the sentiments it carries ranges from heart-warming to breaking, as its composition is staking on our otherwise limited empathy. It is an awesomely shot short film that encompasses more than an anxiety inducing dark tale, more so a cocktail of angles that balloon numerous concepts for a watchers perusal.