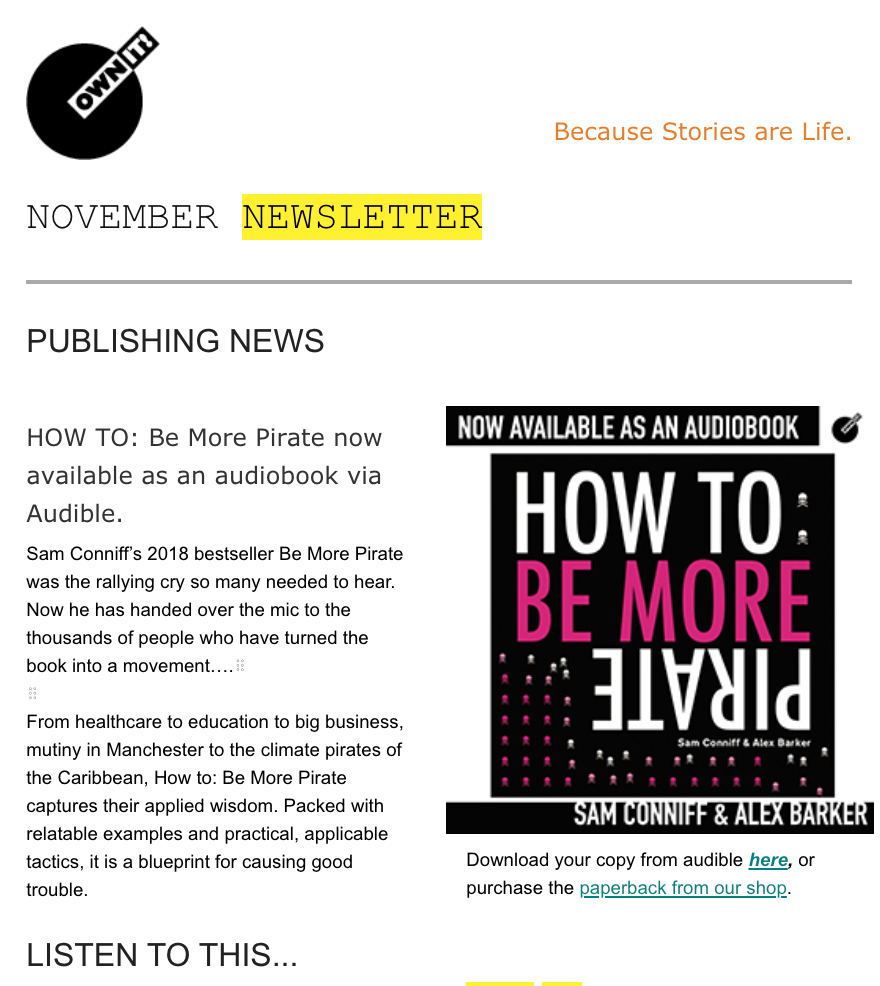 Staying up to date with all things OWN IT!

HOW TO: Be More Pirate now available as an audiobook via Audible. Sam Conniff’s 2018 bestseller Be More Pirate was the rallying cry so many needed to hear. Now he has handed over the mic to the thousands of people who have turned the book into a movement….⠀
⠀
From healthcare to education to big business, mutiny in Manchester to the climate pirates of the Caribbean, How to: Be More Pirate captures their applied wisdom. Packed with relatable examples and practical, applicable tactics, it is a blueprint for causing good trouble.

OWN IT! introduces #FIRSTFRIDAYS.

Download your copy from audible here, or purchase the paperback from our shop.

Head over to ownit.london/first-fridays/ to check out the full playlist or listen on Spotify or Apple Music.

OWN IT! introduces #FIRSTFRIDAYS.

The First Friday of every month we’ll be releasing a playlist carefully curated with songs exploring the featured book of that month. ⠀
⠀
November’s playlist looks at the themes within the book HOW TO: Be More Pirate, co-written by Sam Conniff + Alex Barker.⠀

A month into the publication of Endless Fortune and the reception has been amazing, including features in:

Mangrove – the first of a series of 5 films by award-winning director Steve McQueen, which celebrate West Indians in Britain.

Mcqueen’s five-part anthology series – Small Axe – takes its title from a West Indian proverb about collective struggle (“If you are the big tree, we are the small axe”) and encompasses true stories from the late 60s to mid-80s. The films each tell a story involving London’s West Indian community, a celebration of Black joy, beauty, friendship, love, music and food, despite subjection to rampant racism and discrimination.

It is no surprise that our own Courttia Newland is a part of this iconic moment for Black British TV, having co-written with Steve McQueen the screenplay to the second part of the anthology series – LOVERS ROCK (which aired last Sunday, catch-up now on BBCiplayer here) and RED, WHITE AND BLUE, which airs this Sunday. Read more here.

Watch the first part of Small Axe – Mangrove – on BBCiPlayer:

DEREK OWUSU’S THAT REMINDS ME NOW AVAILABLE IN PAPERBACK

The first novel by Stormzy’s imprint + winner of the Desmond Elliott Prize 2020 –That Reminds Me – is a fresh and powerful debut – now available as a paperback here.

That Reminds Me is the story of one young man, from birth to adulthood, told in fragments of memory. It explores questions of identity, belonging, addiction, sexuality, violence, family and religion. It is a deeply moving and completely original work of literature from one of the brightest British writers of today.⠀

Mrs Death has had enough. She is exhausted from spending eternity doing her job and now she seeks someone to unburden her conscience to. Wolf Willeford, a troubled young writer, is well acquainted with death, but until now hadn’t met Death in person – a black, working-class woman who shape-shifts and does her work unseen.

Amazing to see Selena’s Pessimism Is For Lightweights & her upcoming novel Mrs Death Misses Death get a shoutout on Sky Arts Book Club.

REFLECTIONS OF ME – Kirsty Latoya

THE TIME BEFORE THE TIME TO COME – Jill Johnson

ONE SATURDAY IN 82 ON BROADWAY MARKET – Stuart Goodman

CHECK OUT OUR SHOP HERE