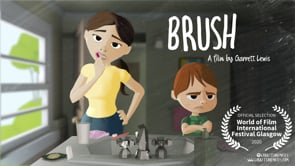 The simplicity of some shorts boasts an earnest intricacy that swells my appreciation of the film. In this case, Brush is a stirring animation by Garrett Lewis, an obsessive filmmaker who works as a Character animator for Walt Disney Animation Studios. Clearly, from his animation reel, Garrett is a pretty incredible animator – and seemingly has a grasp of emotional tales, a perfect ethos for Disney.

I managed to get a few comments from Garrett regarding the conception of his short: “What made me think of this film, I thought it would be interesting to tell a story of someone’s life through one of the most monotonous routines we do in our everyday life – brushing our teeth.”

In brief, Brush compiles a multitude of feelings projected on a mirror which acts as our vantage point into this young boy’s livelihood. It shows the lifelong adventure of this boy in the act of brushing his teeth. “It posed an interesting creative challenge of how I can tell a full story through this seemingly insignificant lens.” Garrett adds.

The mirror captures reflections and recognitions of an everchanging attitude infected by the imposition of time, while showing the little things which matter in growing up too. I found myself pausing the short at moments, to grasp the scope of the animation. It was consistently colourful, and very detailed – as you can see with the debris lingering of the mirror.

I really appreciated the lovely sentiment of growth, the vivid scope of objects surrounding each short scene, and it hosts an endearing soundtrack, composed by Marc & Landon Akiyama, to the intense changes evident within this boy becoming a man. The little shifts of homely objects, the expansion of space and the race of emotions it evokes in every flick evoked something gentle within, and I was left wondering – how does my mirror see me.

I am so immersed in my mirror sequences that a few days or even a week blend into one, I rarely get to recall visions from another time. Though it is an incredibly reflective space, and even considering my past seminal moments facing the man in the mirror. “When I brush my teeth, I tend to reflect about stresses/anxieties in the future, but I rarely stop and appreciate where I am now in the moment.” explained Garrett. I believe, I was caught in a similar thought throughout.